« There is one unique reaction that you can rarely witness: people listening in full silence as if they are listening to a prayer in a temple, very much like a mystical experience. If you meet up such a demonstration, you will also notice that most listeners will not leave the room unless the track that is being played is completely finished. That is, fully respecting the music and nothing else, neither the sound nor the components. And this is exactly what I witnessed in Ypsilon Electronics’ room in partnership with Finite Element. To assure my testimony I visited the room for several times and that temple like atmosphere never changed. 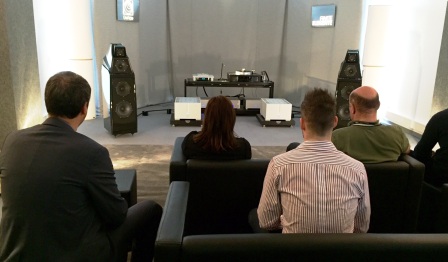 Regarding the reactions of the listeners in order from respecting the music to respecting the reproduced sound, Ypsilon Electronic’s room was followed by Nagra Audio’s room in partnership with Kronos Audio only by a small margin and Kaiser Audio’s suite in company with Kondo Electronics. I can also count Absolare (demonstrating with Kronos Pro and Rockport Altair), Soulution Audio (demonstrating with Magico M-Project) and Cessaro Horn Acoustics rooms among the most respected due to my observation. 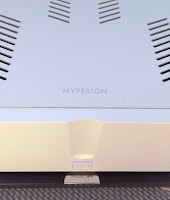 Did the listeners’ reactions support my likes and dislikes? Up to a certain point yes. I too found Ypsilon and Nagra rooms as musically most impressive and satisfying (still keeping my concern about the high frequency band in reserve). As both set−ups were driving Wilson Alexias, this also gave me the opportunity to make a fair comparison between the two. The only fact that bothers me while making such an evaluation is my lack of knowledge if both were properly burnt in. In fact I knew Ypsilon Hyperion monoblocks –it was the world premiere– were fresh from the factory, not burnt in more than 50 hours and Wilson Alexias were out of their boxes for the first time in Munich as Demetris Backlavas explained during a chat with Matej and me. I have no idea if Nagra electronics and their Alexias were conditioned properly since I didn’t have a chance to ask. 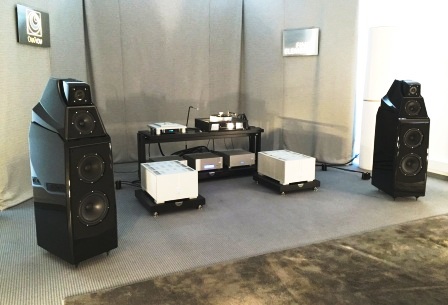 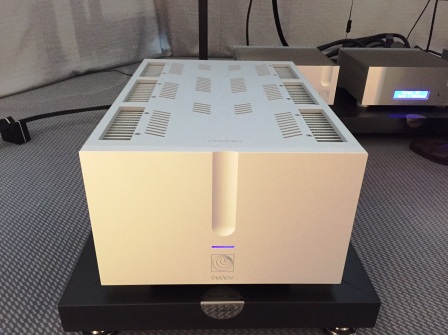 Despite being raw, in the Ypsilon room all the components in the system were playing in such harmony and in such a musical way that one could easily ignore any weaknesses related to their lack of condition. This was also by far the best performance of Alexias in Munich and I’m saying this in confidence since I had the chance to listen to 4 more performing in other systems within a few hours time. In fact Matej shared my opinion, even going further to say that these were the best sounding Alexias he had heard anywhere else. To my ears Hyperions –even in their not burnt in condition– were simply fascinating. They just got out of the way and let the music flow. The way they create soundstage and space was exemplary. 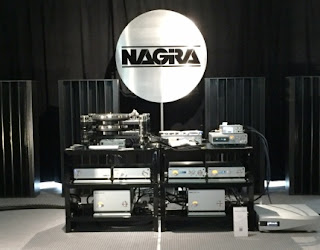 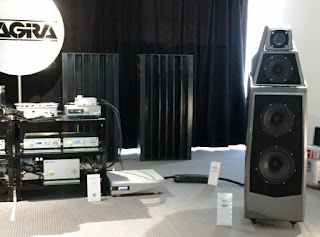 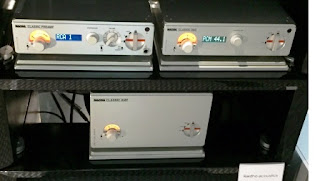 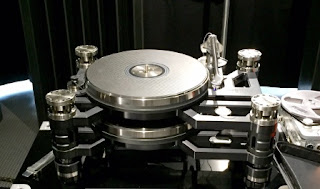 Nagra set-up sounded very impressive and musically very satisfying though it didn’t quite match the level of inner detail and finesse of the Ypsilon set-up, only by a small margin though. Does that matter? Well, yes and no. One would not be able to make any sound criticism on the performance of the Nagra system as it played authoritative and complete without any flows. But once you witness the hidden potential of the Alexias revealed when driven by Ypsilon Hyperion monoblocks, then you realize what was missing and this is what high end audio is all about. If I’m allowed to make a metaphorical comparison, I will say while Nagra unveiled the music, Ypsilon stripped it to the bone. »

« Ypsilon Electronics gave another excellent performance this year with their complete line up of tube hybrid amplifiers and sources. An upgraded version of the Aelius mono power amps ($36.000), with silver interstage transformers, and driven by the 100 PST Mark II pre-amplifier ($37.000), performed very well on the classic “Mr. Bones” by Steve Strauss on LP.

Ypsilon brought their CDT 100 CD transport and DAC 100 converter, but I focused on the analog front end, which is rarely absent in the Munich top floor rooms. The turntable came from Bergmann, their Magne System, which is among the few modern designs that offer exquisite minimalistic aesthetics, serious engineering and great sound, all at the same time. The Transfiguration Orpheus MC cartridge was singing through Ypsilon’s VPS 100 phono stage and matching step up transformer while speakers were sourced from Swedish company Perfect 8.

The Point MkIII (website still has the MkII model) priced at $100.000 is a rather peculiar design made from glass panels and not the typical MDF wood, and there is no sign of internal treatment as well. An open dipole with 2×7” magnesium midrange drivers and air motion tweeter sits on top of a pair of 10” woofer housed in a glass box which also contains a 400Watts class D amp for each bass driver.

Finite Elemente provided the beautiful Pagode APS racks while cabling was a mix of Kubala Sosna and zip cords! At first sight the speakers would have you expecting a cold and maybe soul-less sound, but as I already mentioned this was not the case. Instead, guitar strings were reverberating in the room in almost “live” fashion, with ambience and texture during the playback. »